Hope Texas-USA will use sea current generator to both generate electricity and protect the coast- Eng. Doan Manh Dung

According to information from the United States, the state of Texas is expected to spend $ 31 billion to build a wall running along the coast to protect the coast  from wind and  storms for many years in the future.

The cause was the wind that caused the storm and the northeast monsoon that destroyed the Texas coast. In principle, the wind caused by hurricanes in Texas is anti-clockwise and coincident with the northeast wind, creating a directional surface current along the Texas coast from north to south.

The construction of reinforced concrete walls will prevent waves from damaging the coast, but if a system to receive flow energy is placed here, it will both generate electricity and protect the coast.

From Vietnam, Ks. Doan Manh Dung proposed to Texas leaders a solution to use a generator system by natural flow to both generate electricity and protect the coast.

The principle of the generator by natural flow is as follows:

A small module has a pair of rotating drums and is positioned in the frame as shown in the following figure: 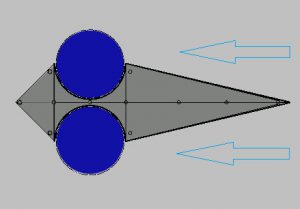 The mechanical diagram of the above module is as follows: 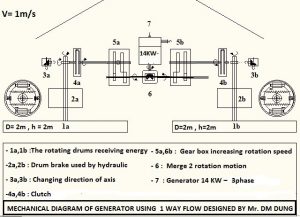 Rotary drum is designed  with 2m in diameter and 2m deep.

The inside of the drum has a suitable empty  to float in the water.The drum wall has a ledge to receive the force from the flow.

With the above model, the drum receives rotational torque when the flow touch to the drum.

A small module can get maximum power in depth. One large module has 7 small modules arranged in two rows to receive maximum horizontal flow kinetic energy. 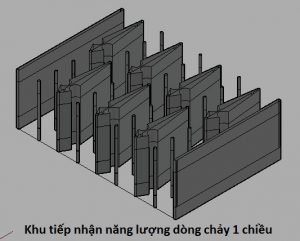 How to arrange 7 small modules in one large module.

The frame is used by reinforced concrete placed on the seabed.

The large module here is designed with a water depth of 10 m, so a small module has 5 pairs of drums.

The large module allows aquatic animals up to 4 m in diameter to move through. 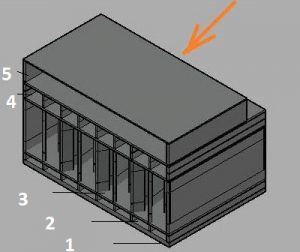 The large modular  has the following floors :

The first floor is a bearing base, located close to the seabed and tightly closed on the seabed.

The 2nd floor allows alluvium to move through.

The 3rd floor is the recieving energy  floor, here is 10 m high.

The 4th floor is the floor for tide up and down.

The 5th floor is the operating floor  and contains all machines.

The calculation can be as simple as:

Each drum is 2 m in diameter and 2 m deep. Because half of the cylinder is covered, the plane perpendicular to the flow receives the kinetic energy of a drum with a cross section of 2 m2. The flow rate is 1m/s, so in 1 second, 2 m3 of water touches  on the rotating drum to create rotational torque to turn the drum.

There are the navigating signal lights at the  factory to avoid marine accidents.

The layout of a power plant by ocean currents with 10 large modules linked together is shown below: 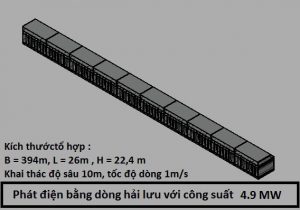 The large module is built  at a submerged or floating dock, inside there are water tanks.

After the large module is sunk, the rotary drum is assembled by bringing it from above to below the surface of the water.

The resistance to marine life from adhering to the concrete block preventing rotation of the drum is overcome by a special paint  and periodically drawing the drum up for cleaning in the rotating area of the drum.

At the end of the project, the poles are lifted, sand in the tanks is sucked out , the large module will self-float and be dragged to the appropriate location for destruction.

At the position without power grid, electricity can be used to electrolyze liquid hydrogen and oxygen.

Since the energy of the current is converted into electricity, the current does not affect the coast. This way protects the coast and at the same time provides electricity for people.

The author is willing to cooperate with American scientists to explain and implement the above idea in Texas – USA for the benefit of people./.