Natural flows have breadth and depth. The flow on the waterface has the highest intensity.

Humans have made many inventions to receive natural flow energy in the process of progressing to civilization.

But in 2016, Vietnam technology receiving natural flow energy was announced, which has fundamentally changed the perception and opened up the industrial method to create a pragmatic industry providing clean energy by natural flow.

So , what is natural flow? Those are streams, rivers, tidal currents, and ocean currents moving in nature formed from many different causes. The tail flow of hydroelectric plants after using their potential energy to turn turbines is also a natural flow.

In order to use the energy of the natural flow, in the ancient world, people used to use circular waterwheels with an axis that crosses the direction of the flow.

The flow acts on the shields to make the reels rotate, so that they can receive force or bring water from low to high.

When electricity was invented, the spinning wheel pulled the rotor to generate electricity

Many generators are created and placed in a natural flow to generate electricity.

The current traditional generators in the world, placed in the natural flow, have propellers according to the following model:

There are three main disadvantages of the generators using traditional propeller above are:

2/ The propeller has weight because of the gravity of the earth,so the energy of the flow has to provide the energy that is not useful to overcome the weight of the propeller when rotating.

3/ The generator is located in the water, so it must be watertight. The cost of keeping the goal watertight is very large and the maintenance cost is also high.

To overcome the above shortcomings, a new Vietnamese technology that receives natural flow energy is called “Rotating Drum” technology.

The propeller is a drum floating in the water, freely moving around a fixed axis. The cover drum have an edge receiving force from the natural flow. The drum is half covered by the fixed frame in the axial direction as following figure: 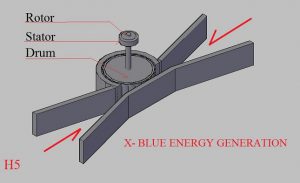 The single-module model with frame  can received maximum energy in depth and most energy in width with  tidal flow- 2 directions.

Flow energy acts on the rotating drum, creating a torque, which rotates the generator system located in the air – the above of water .

Because of drum floating in the water, the gravity of the earth on drum is removed, the energy of the flow is concentrated to rotate the generator system.

With a modulus, it can receive all the kinetic energy of natural flow along the direction of the depth. 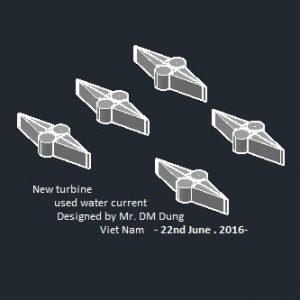 With multiple modules arranged in 2 rows, the system gets the maximum of the kinetic energy  in the width of natural flow.

The remaining problem is to find a reasonable model so as not to affect the aquatic environment and to need reasonable materials to buil frame and to fix  the machine on the seabed and ensure optimal exploitation.

The central coast of Vietnam is home to the largest concentration of ocean currents on earth because of the fortunate integration of advantages from the western coast of the Pacific Ocean and the unique characteristics of the coast.

The kinetic energy of the ocean currents on the central coast is concentrated in the area near the mainland, located in the territorial waters of Vietnam, so it is very convenient for exploitation, bringing electricity ashore and ensuring security for the plant. Central Vietnam has a source of stone, gravel, sand, and limestone for cement production, which are the main materials that are very inexpensive to create the frame system for ocean current generator system on the seabed.

Because of the huge power generation capacity of the “Rotary Drum” solution, the idea of ​​​​centralizing liquid hydrogen production is a proactive strategy. Where there is a good electricity network, electricity will be supplied to the grid. In contrast, it will focus on producing liquid hydrogen to supply the most industrialization, transportation, and thermal power plants ./.

Hope Texas-USA will use sea current generator to both generate electricity and protect the coast- Eng. Doan Manh Dung